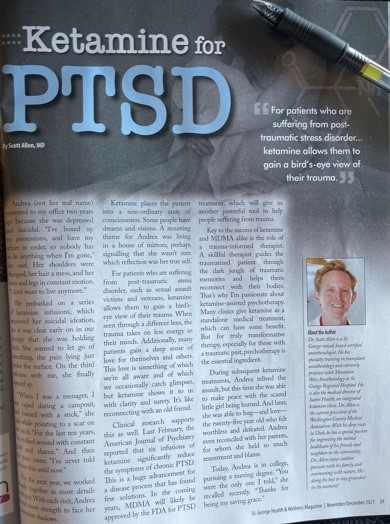 Andrea (not her real name) presented to my office two years ago because she was depressed and suicidal.

“I’ve boxed up my possessions, and have my affairs in order, so nobody has to do anything when I’m gone,” she said. Her shoulders were slumped, her hair a mess, and her arms and legs in constant motion. “I don’t want to live anymore.”

We embarked on a series of ketamine infusions, which improved her suicidal ideation, but it was clear early on in our therapy that she was holding back. She wanted to let go of something, the pain lying just under the surface. On the third infusion with me, she finally opened up:

“When I was a teenager, I was raped during a campout, and burned with a stick,” she said while pointing to a scar on her neck. “For the last ten years I’ve walked around with constant guilt and shame.” And then the tears came. “I’ve never told anyone this until now.”

For the next year, we worked closely together as more details came out. Each visit together, Andrea found more strength to face her innermost shadows.

Ketamine places the patient into a non-ordinary state of consciousness. Some people have dreams and visions. A recurring theme for Andrea was living in a house of mirrors, perhaps signalling that she wasn’t sure which reflection was her true self.

For patients who are suffering from post-traumatic stress disorder, such as sexual assault victims and veterans, ketamine allows them to gain a bird’s-eye view of their trauma. When seen through a different lens, the trauma takes on less energy in their minds.

Additionally, many patients gain a deep sense of love for themselves and others. This love is something that we’re all aware of, and occasionally catch glimpses of, but ketamine shows it to us with clarity and surety. It’s like reconnecting with an old friend.

Clinical research supports this as well. Last February the American Journal of Psychiatry reported that six infusions of ketamine significantly reduce the symptoms of chronic PTSD. This is a huge advancement for a disease process that has found few solutions. In the coming years, MDMA will likely be approved by the FDA for PTSD treatment, which will give us another powerful tool to help people suffering from trauma.

Key to the success of ketamine and MDMA alike, is the role of a trauma-informed therapist. A skillful therapist guides the traumatized patient through the dark jungle of traumatic memories and helps them reconnect with their bodies.

That’s why I’m passionate about ketamine-assisted psychotherapy. Many clinics give ketamine as a standalone medical treatment, which can have some benefit. But for truly transformative therapy, especially for those with a traumatic past, psychotherapy is the essential ingredient.

During subsequent ketamine treatments, Andrea relived the assault–but this time she was able to make peace with the scared little girl being burned. And later, she was able to hug–and love– the 25 year old who felt worthless and defeated. Andrea even reconciled with her parents, to whom she held so much resentment and blame.

Today she’s in college pursuing a nursing degree. “You were the only one I told,” she recalled recently. “Thanks for being my saving grace.”

Accessibility by WAH
Call Us Text Us